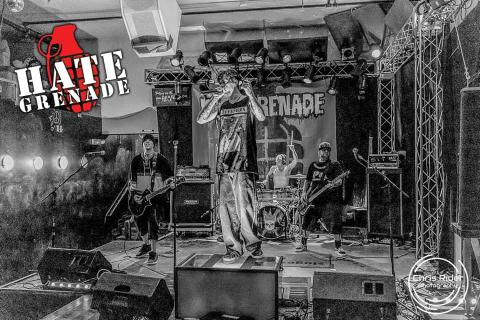 We sat down with Vinyl Lollipops recently for an interview.  Check out how we do our writing, who influences our music, how we got our name, and more below!

Laura:
What genre of music do you consider Hate Grenade to be?

Hate Grenade:
We’ve been flying the nu-metal banner proudly since 2012 because we frequently blend hip-hop and industrial elements into our metal sound.

When we started, there weren’t any bands from our local scene mixing hip-hop with metal. We felt we would be able to offer something unique.

As kids, we grew up during the nu-metal era. We loved the genre and wanted to add our spin to it as musicians.

Laura:
What's the ultimate direction for your band?

Hate Grenade:
To continue creating and sharing the music we enjoy, for the people we love, as long as we can.

Again, to inspire young musicians the same way that our favorite bands inspired us along the way.

Laura:
How would you describe your music making process? 

Hate Grenade:
The writing usually starts as an idea or demo that Jeff or Chuck bring to practice.

Musically, the ideas can range from a mostly complete song, to a collection of riffs that we work with.

From there, we listen to and jam the ideas with each other, adding our parts and editing until the ideas start to evolve into a more refined song.

This process can range anywhere from a day to a few months depending on how everyone feels a song is coming together.

Once we have something that sounds decent, we’ll record the idea and email it to our bassist, Donny (Rochester, NY). He’ll start writing his parts and sharing ideas.

We email back and forth a few more times for the polish and then it goes into our song vault until it’s time to record.

Lyrically, Jeff is the mastermind behind the words and the delivery. He usually writes lyric ideas down on his phone as he thinks of them. When we’re working out new songs during practice, he free-styles the new lyrics over them until something sticks.

In general, we’re extremely blessed when it comes to the writing process as a band because each of us understand the sound we’re working to achieve together. It’s creative, fun and we’ve really enjoyed the songs we’ve written so far.

Hate Grenade:
We wanted something aggressive, memorable and 100% unique.

Story:
The name was actually suggested to Chuck by his wife in the very early discussions of creating the band. He had been tossing around name ideas to her and one night while they were watching Jason violently murder camp counsellors during a Friday the 13th movie, she turned to him and asked, “what about, Hate Grenade?”

Fast forward several months later, Jeff comes in to audition for vocals. Chuck and Mike start jamming a song they had been working on and Jeff begins to free-style over the top with a combination of rapping and screaming. It sounded fresh, it sounded brutal! We all looked around the room amazed with the chemistry we had just discovered with each other and Jeff joined the band.

The next day, after thinking on the music they had just made, Chuck texted everyone with the Hate Grenade band name.

Everyone liked the idea and we collectively scanned the internet searching to see if anyone else had claimed it. Much to all of our surprise, it was available.

Oct. 2012, we started registering social media accounts under the name and ‘Hate Grenade’ was officially born.

Fun Fact:
The audition song mentioned above is called, “Walk Away” – It’s the first song we ever wrote together as a band and the first song on our debut EP, “Reload”.

Laura:
What should fans expect to experience at a show?

The live show is our chance to introduce ourselves. We’re a pretty shy group of guys, so in some sense, our performance acts as an ice-breaker.

We jump around, slam out our tunes and connect with everyone we can before, during and after the show.

Expect to be part of something bigger than the music itself, because you’re joining our family. You’re going to make friends and you’re going to get addicted to the positive vibes and great memories we’re collectively creating with one another.

We’ve been blessed to have met some of the most incredible people along this journey and we’re looking forward to meeting you too - See you up front! \m/

Laura:
Typical question here. Who has influenced you the most via music?

Hate Grenade:
Our families have definitely influenced us via music.

Chuck grew up watching his dad play drums in area bands. He traveled to shows, helped load gear and was instantly hooked to the life-style from a very young age.

Jeff grew up with a similar background. His mom played in bands and taught him technique and scales on the bass as soon as he could hold a guitar.

Mike’s dad got him started with guitars/drums at a young age too.

Fun fact: Mike’s dad has some solid carpentry skills and helped us build our first merch road-case and stage-boxes.

Donny’s family is pretty rich with music history too. In fact, we’re pretty sure Donny was just born holding a guitar in his hand.

All these bands and more are responsible for inspiring our music. We took our favorite flavors from each influence, added some HG touch and created our own unique identity.

Laura:
How can fans and future fans locate, listen to and buy your music?

Laura:
Is there anything else you would like your fans to know?

Hate Grenade:
The music industry is a fan-driven business. Independent bands like us only have traction in the eyes of venues and promoters if we have support from our friends and fans at every turn.

There are no big record labels, agents or companies investing in us and if we’re lucky enough to be presented with a large performance opportunity it usually comes with a price tag stapled to it.

This is why your support is so important! If you enjoy an independent band: attend their shows, purchase their merch, stream their music, follow their social media channels and help them spread awareness.

It’s the very best thing you can do to help independent bands earn larger opportunities and encourage their growth.

Laura:
What's coming up next for Hate Grenade?

Hate Grenade:
We finished up our “Initiate Killmode” tour this past November, so we’re starting to think about putting together another tour for this spring/summer. We had such an amazing time meeting new people and jamming new venues. We’re already amped to get back out there to do it again.

At the same time, we have several new song ideas that we’ve been working on, so we’re going to start cranking out effort into our next album soon. No official release date has been set but we’re well on our way with some fun new ideas that we’re excited to share.

Finally, we’ve been blasting out a collection of Deftones material recently.
We’re planning on doing some limited one-of shows this coming year as a tribute to one of our biggest musical influences.

2020 is shaping up to be an amazing year and we’re looking forward to seeing how far we can push the envelope.

Whether you’ve been part of the journey from the beginning or you’re just getting started; we thank EVERYONE that has ever taken the time to show HG love! Your support means everything to us!